THE SACRED NETWORK – Chris H. Hardy,  shows – through multiple experiences and subtle perceptions – how individuals attuning their minds with each other (for prayer, music playing, trance-dancing, etc.) may create a field of harmony that puts them in telepathic contact—called telepathic-harmonic fields or Telhar fields. The book recounts astounding experiences of these Telhar fields among Sufis in prayer or ascetics in India, among people meditating or dancing, or in jam sessions, and plunges us into the live experience of shared consciousness in different cultures and parts of the world. Though this wealth of personal experiences, Chris H. Hardy shows us how to live outstanding states of collective harmony – the key to the next leap in human evolution.

The energy of consciousness also infuses sacred places and buildings, and we may put this in light via the exploration of leys and of the ancient megalithic and Druidic grid, on which is embedded the more recent Christian grid—the resultant global and planetary grid being the Sacred Network. Energy lines connecting monuments in Paris thus form astounding structures based on sacred geometry, such as the Mary Magdalene Church embedded in a mandorle, within a Golden Rectangle and an hexagon. (Part 2). Finally, unique peak experiences point to dimensions of consciousness that, in transcending our usual space and time limitations, can bring valuable information about distant or future events (Part 3).

All along the book, the processes and dynamics of Telhar fields are sorted out with each experience and in the last part, a more global theory of Telhar fields is used to explain such phenomena as the quantum entanglement and the EPR paradox, and brings astounding predictions

Chris H. Hardy reveals here a long and passionate quest for exploring and deciphering a more Hermetic level of reality: the dimension of collective consciousness that will soon trigger a fantastic leap for all of humanity.

Since the age of eighteen, and as a result of an intense meditation practice, Chris has developed her own “Direct Path” of connection to her own Self and to the semantic dimension (the collective unconscious) and a remarkable array of psi talents ­­– one of which is to perceive the energy of consciousness as it flows in and around people, and as it imprints places and springs out as arches of light from the tip of steeples and domes.

An unquenchable curiosity brought her to travel extensively to the East, Middle-East, Central and South America, as well as Africa, to study the ancient paths of wisdom, while in parallel she tackled the novel scientific research on consciousness and psi, chaos and systems theory. All this led her to a PhD in cultural anthropology and several books – ranging from self-help books on visualization and positive thinking to a full-fledge theory of consciousness (Networks of Meaning, NJ: Praeger, 1998).

It is this wealth of experiences, that the book retraces, that led Chris H. Hardy to two major breakthroughs; the first, that groups of people may achieve a state of collective harmony ­­– creating an energy-field with astounding properties – and the second, that consciousness may imprint places and buildings. Nothing but a rare combination of striking psi gifts and a rigorous scientific mind could have brought to light such amazing harmony fields and the magnificent network of energy connecting standing stones and monuments.

Chris Hardy is one of the most intrepid explorers of the frontiers of consciousness. The Sacred Network provides its readers with a blueprint for their development both as individuals and as members of the human species.” Stanley Krippner, Ph.D., professor of psychology, Saybrook University, and author.

“A scientist mind meets a visionary sage in author Chris Hardy. She foresees our individual souls weaving networks that will connect all over the world. One of the most creative and original books of our times.”
Allan Combs, professor of transformative studies, California Institute of Integral Studies, and author.

“Few among us are willing to follow our thoughts and intuitions until they bloom with discovery. Chris Hardy has devoted her life to finding out what lies beyond the veil and bringing it back to us so that we might share in her vision. The Sacred Network is nothing less than fascinating.” Linda Dennard, Ph.D., associate professor of Political Science and Public Administration at Auburn University.

The Sacred Network’ data, based on actual figures made out of leys and energy lines within Paris is a whole new range of proofs giving unprecedented weight to the theories advocating that Maria Magdalene was of a royal descent from Egypt as well as a priestess in ancient cults; that she was the spouse and first disciple of Christ and that Their descent became the Bloodline of the Merovingians.

The Sacred Network explains how humanity as a whole will soon undergo a fantastic leap in consciousness – achieving a supraconscious collective state. Novel mental capacities are emerging right now, especially in terms of group harmonization, showing that collective consciousness is the next step in human evolution. As fantastic as it may sound, this evolution has been primed since 6000 BC, by a civilization of immense knowledge – the megaliths people. By erecting standing stones worldwide at locations having an uplifting effect on consciousness, they created the blueprint of a Network that was going to be not only revered but constantly complexified until today. Since ages, the Sacred Network has thus linked sacred sites of all cultures and religions on Earth. The connection between distant sacred spots was prodding collective consciousness, thus prefiguring a time when a global attunement would be achieved. And now the time has come for humanity to leap into a global and harmonized consciousness.

Even within major cities, prominent buildings have been organized and oriented in such a way as to boost the arcs of energy of the Network. In Paris for example, this has been done by each and any government, whether tribal Gaul kings, monarchy, empire, or else democracy. The sacred spots chosen for erecting stones have always remained sacred, each new religion building on the very same site. Thus, in the underground foundation of Paris’ cathedral was the Gaul Pillar of the Nautes, then a temple to Diana, and finally the foundation of the diverse versions of the cathedral. Similarly, Chartres cathedral was erected above a prominent druidic temple—an arc of twelve standing stones bearing carvings of Runes.

In the modern Paris, lively arcs of light rebounding from building to building form stupendous structures extended over the whole city such as pentagrams, circles, and Sri-Yantras or Stars of David. These constellations in stone, beyond their sacred geometry signature, are encoding amazing stories. The temple-church devoted to the Magdalene, perfectly fitted in a thrice sacred structure forming the Lily of France’s central petal, reveals how the Magdalene is linked to a royal line, and further back to Egypt and Isis – thus comforting Lincoln’s views. 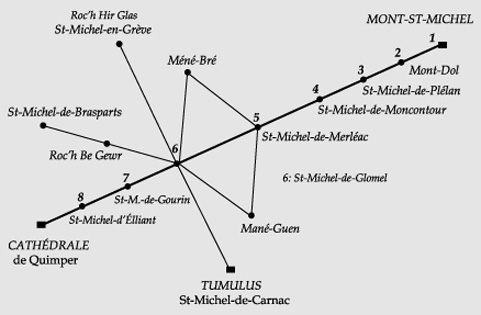 THE SACRED NETWORK – Chris H. Hardy – St-Michel line in Brittany France – showing the unique grid of leys connecting the Druidic sacred sites to the Christian ones.

An extremely interesting Druidic-Christian alignment—called the Saint-Michel Line (or St-Michel line)—has been discovered in Brittany (France) by Gwen Le Scouezec, great Druid and eminent expert in Druidism, megaliths, and secret Brittany.  The straight line crosses Brittany from east to west and connects no less than eight sites dedicated to St. Michael (St. Michel in French), all of them on hilltops open to all directions, sometimes with breathtaking views, apart for one that stands a little below the summit. The line starts in the northeast, at the well-known sacred site Mont-Saint-Michel, with its magnificent abbey standing on a steep hill surrounded by the sea at high tide. The eighth site is St-Michel-d’Elliant. The line, however, does not end there: farther to the west, it passes through Quimper Cathedral. The line thus traverses about 130 miles. Eastward, it is aligned with the rising sun on May 1 (the Celtic feast of Beltane), and to the west, with the setting sun on November 1 (the Celtic feast of Samhain, at the end of summer).

Investigating the whole region, Le Scouezec found additional alignments linked to the archangel. A near-perfect perpendicular line links St-Michel-en-Greve to the gigantic St-Michel tumulus (or cairn) in Carnac, with this line crossing the long St-Michel line slightly east of the sixth site (St-Michel-de Glomel). Then a perfect diamond or rhombus appears, linking the fifth and sixth St-Michel sites (the node) to two sites equidistant from the line: Mene-Bre (a high summit) and Mane-Guen, or the White Sacred Mountain in Breton.

Finally, the second most important site dedicated to St. Michael in Brittany—St-Michel-de-Brasparts—is on an oblique line to the center (St-Michel-de-Glomel). This line passes exactly by another highly charged mount near Huelgoat: Roc’h Be Gewr, or the Rock of the Tomb of Gheor, another name for the giant Gargan.

This magnificent alignment is thus expressed by a similarity in the names of the sites, most of them related to St. Michael. In my sense, however, another striking feature of this St-Michel line, beyond the spatial alignment, could well be the time alignment—or time superimposition.

The most ancient time layer of the St-Michel line is that of the megaliths. We have two megalithic sites on the line: first a very ancient tumulus in Carnac (a region abounding in megaliths), and second the megaliths that were standing on the hilltop of Mont-Saint-Michel. The medium time layer involves pagan and Celtic cults that existed before the Christian religion took over: there are still traces of a Mithraic cult (bull worship) at Mont-Saint-Michel, and the rock at St-Michel-en-Greve (Roc’h Hir Glas) was a well-known pagan site, and according to a local legend, a magical treasure is hidden there. Moreover, explains Le Scouezec, two places were Celtic high sites: both St-Michel-de-Montcontour and Roc’h Be Gewr are surrounded by sacred sites (the latter has sacred sites disposed in a circle around it).

The third time layer is that of the Christian St. Michael. There are two major St. Michael shrines: the magnificent abbey of Mont-Saint-Michel and St-Michel-de-Brasparts. In addition, there is the cathedral of Quimper and a church in the village of St-Michel-de-Plelan. Finally, there are three chapels: one at the tip of Mont-Dol, ruins of a second one on the mount of St-Michel-de-Merleac, and a third one standing at midhill at St-Michel-de-Glomel, where, moreover, a cross was standing on top of the hill. Altogether, for the Christian layer: three high sites, four churches or chapels, and one cross.

Following up with Le Scouezec’s discovery, Court-Payen lengthened the St-Michel line toward Normandy and found two additional St-Michel sites and a menhir.19 Both authors have discovered that the name Mont-Saint-Michel was given to mounts previously called Mont-Mercure or Mont-Hermes—sites dedicated to the Roman god Mercury or Hermes in Greek mythology—and before that these sites were called Mont-Belen, dedicated to the god Belen, the god of light at the age of the megaliths people.

Court-Payen traced a complex network of lines over the whole of Europe, connecting sites linked not only to St. Michael, but also to the light (luz in Latin; its derivations include Lux, Lucie, Lucia, etc.). An interesting one is the line connecting Mont-Saint-Michel in France to Saint-Michael’s Mount in England, at the extreme tip of Cornwall (near Penzance). This line, to the south, runs through several eminent spiritual sites, such as Vierzon’s cathedral, Bourges’ cathedral, Sept-Fons Abbey, St-Michel-de-Maurienne, and Castel Saint-Ange in Rome. (Read more on this subject in The Sacred Network, chapter 7, Cathedral Builders and Megaliths.)